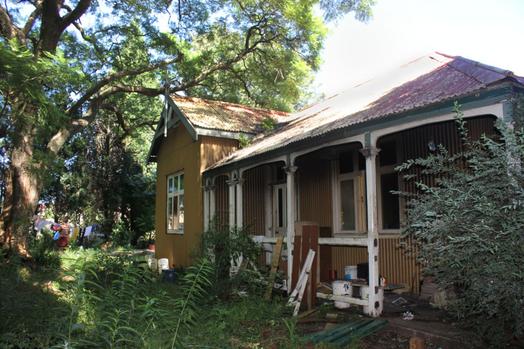 is an historic wood and iron building owned by Council, that is currently located the suburb of Delarey (Maraisburg) and has no connection with General Jacobus Herclaas de la Rey who was a leader in the South African Anglo-Boer War.

The structure dates from the early 1900s, built of corrugated iron on a wood frame, with a soft brick interior, and is typical of worker’s cottages from this period in Johannesburg. The house was built in two main phases. The oldest part, on the northern side, was originally a small three room cottage built in 1903. In 1909 the house was extended in front, with a verandah and new Victorian style façade added. The house remains quite small by modern standards.

In 1985, the property was purchased by the Roodepoort City Council with the intention to restore and furnish it as a house museum. The Roodepoort Museum undertook restoration of the house from 1985 to 1993.

The surrounding area in Delarey has seen some decline in recent years, and is not generally attractive as a cultural destination. At the same time, the Delarey House has slipped into disrepair. Currently, the house is exposed to squatters and scavengers, who have begun stripping the woodwork from the building, and are placing the structure at risk.

Action is needed in order to save the building from further damage. In light of the recent vandalism suffered by the house, there is a need to rescue the building by moving it to another location which provides for the conservation of this heritage structure, and helps make it more accessible to the public. This will involve carefully dis-assembling the structure, moving the pieces to a suitable site, and then re-assembling the building. A new slab will need to be cast to receive the building.

A new site to receive the Delarey House has been identified at Verity Park in Parkhurst, as making good heritage sense in view of the history of the area. Parkhurst was founded in the same year as the Delarey House was built, namely 1903. The area was divided into small 1/8 of an acre (500 m2) stands and sold off by the African Realty Trust. It was slow to get going and many of the first houses would have been of similar construction to that of the Delarey House. A simple wood and iron structure not much more than a shed on a simple foundation with a dugga floor.

Over time this structure would have been added onto and eventually either torn down or incorporated into a more permanent brick structure.

The result being that by the 1930s few of these structures remained, and by the 1970s they had all but disappeared. Houses in Parkhurst have become larger and more elaborate, and with the gentrification of recent years,      the humble origins of the suburb have been forgotten.

The relocation of the Delarey House would thus be a good fit for Parkhurst. It would be used as a reminder of the modest early days and would also serve a purpose of providing community space in the Verity Park recreational complex.

The land that became Verity Park in Parkhurst was purchased by the City in the early 1930s. The suburb suddenly became popular for commuters in the 1930s when a tramline and bus service was introduced to the neigbouring suburb of Parktown North. There then arose a need for a recreational area and the land for Verity Park was secured, consisting of two complete Parkhurst street blocks. Over the subsequent years, Verity Park has grown to include a recreation centre, a clinic, a public library, children’s play area, tennis courts, skateboard area and an old soccer field now well used as a recreational park.

It is recommended that Delarey House be located within this area and be managed and operated by the Recreation Centre with input and support from Community Development (Arts, Culture and Heritage). For the Parkhurst Recreation Centre, this will provide an extension venue for special events and exhibitions. It is envisaged that the Delarey House will function as meeting rooms, art gallery and activity rooms for the various clubs and societies in the area. The heritage of the building, and that of Parkhurst, will be celebrated in historical displays both inside and outside the building

Initial cost estimate being done by architects, but we would appreciate  interested parties to get in touch and become involved in this unique and high profile heritage project. Continued updates will be posted on our website.

If you would like to become involved in this interesting project please make contact with us at info@parkhurst.org.za